Brent and Suzette Fields learned just what the phrase “don’t sweat the small stuff” means when their lives changed due to a rare disease diagnosis. Early in her first year of life, their daughter Chloe showed signs of some developmental delays which led them to seek physical therapy for her. After a few sessions, the therapist had a gut feeling that this was something neurological and advised them to see a specialist.

An MRI later revealed that Chloe had multiple lesions on her brain, typical of Leigh syndrome – a rare genetic neurometabolic disorder (and a type of mitochondrial disease) characterized by the degeneration of the central nervous system. Symptoms typically appear in the early months of life and can be escalated by illness.1 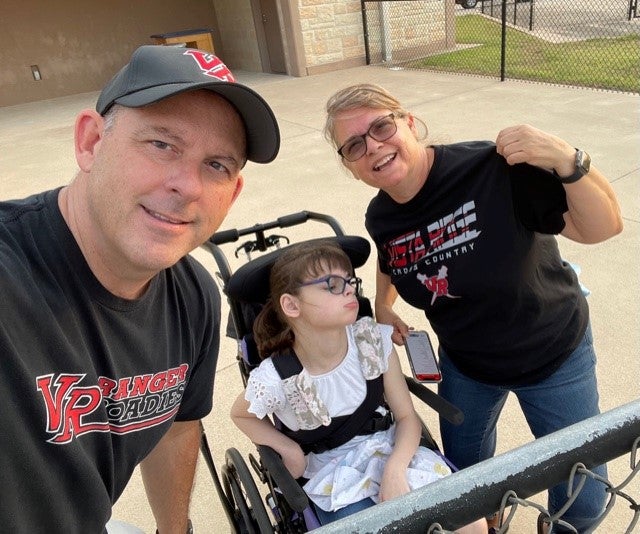 It was a common illness (like the common cold) that later sent Chloe and her parents to the ER, triggering the more serious effects of Leigh syndrome. Desperate for guidance, Brent and Suzette were cautioned to be thoughtful in where to look for answers and were referred to the United Mitochondrial Disease Foundation (UMDF) website by doctors and other caregivers.

Through UMDF, Brent connected with another dad who was not only accessible and supportive but helped them know what questions to ask. He also pointed them to resources they could trust. Being a part of mito community parent groups helped guide them through many “firsts,” including Chloe’s first nasogastric (NG) tube. They found a community that had walked this path before, and no longer did Brent and Suzette feel alone and isolated. They also found support in their own pediatrician who was willing to become a partner and help investigate this rare disease.

This type of support was crucial for the Fields family as they became advocates for Chloe. They now know the power of becoming knowledgeable about Leigh syndrome and how important relationships, both in and out of the clinic, are. They feel lucky to find support in each other as partners, parenting together. They have learned to adjust, adapt to new roles; and they know that every day is important.

At almost 13 years old, Chloe is nonverbal, visually-impaired and has nystagmus (circular involuntary eye movement), dysphagia (difficulty swallowing that requires feeding by gastrostomy-jejunostomy – or GJ – tube), ataxia (impaired balance), myopathy (blurred vision) and other debilitating symptoms. She requires assistance for everything and has a team of 20 specialists.

While Brent, Suzette and Chloe may feel overwhelmed at times, they know how to focus on the good and not take anything or any day for granted.