When the time came for biologist Anu Bhattacharyya, Ph.D. to hand off leadership duties for the PTC Huntington’s disease (HD) research project to clinical project leader Brian Beers, she felt like she was passing the baton in a relay race. As with such a race, your heart continues to beat furiously for a few moments after you’re no longer running. There’s a runner’s high, but also a conflicting inner voice telling you to keep going. 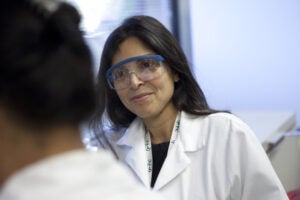 Anu had been working on HD formally since 2013 – longer, really, if you consider contemplation and conversations dating back to 2009. When she had discovered HD was a fit for PTC’s particular brand of scientific research, she’d jumped in hard – immersing herself not only in the scientific discovery of PTC518 – an investigational small molecule, splicing modifier being developed to reduce HTT protein levels in HD patients; but also meeting with patients, caregivers and advocates to understand how HD works symptomatically: “HD is a disease that affects whole families and whole communities,” she explains emotionally, reminiscing about the amazing people she’s met over the years.

Brian is quick to echo that sentiment: “Think of it this way,” he explains. “You could go your whole life and never meet anyone with a rare disease. These people get very close and their passion is contagious.”

In 2019, Brian received the HD baton from Anu and ran with it. Along with the PTC HD Innovation Team (or “iTeam” as he affectionately calls them), he’s spent about a year wading through data, developing a potential therapy that’s ready for testing in healthy human volunteers.

“You don’t want to run into a situation where you’ve spent years working on a therapy and then find out it’s not viable at some later stage in the process. Multi-dimensional input in the process is essential.” – Brian Beers, Clinical Project Leader

The 10-person iTeam shoulders a breadth of biopharmaceutical experience, with researchers, drug developers and commercial experts among them. “You don’t want to run into a situation where you’ve spent years working on a therapy and then find out it’s not viable at some later stage in the process,” Brian says. “Multi-dimensional input in the process is essential.”

However, each scientist on the project knows that you can try and try and fail a lot in this business. Every day over the past year, the iTeam has had to make strategic decisions as the data outputs were received. Ultimately, a year in development has resulted in a Phase 1 clinical trial – an amazing achievement as it could have taken longer or not worked at all.

“Most of the time, you only get the tiniest indication that your molecule is doing what you need it to,” Anu explains. “The phenotypes are easy to misinterpret.

“But you don’t give up,” she continues acknowledging how some scientists will work on just one disease their whole lives.

For Anu, rare disease is literally in her blood (her mother and an uncle are both affected by different orphan diseases) – and she takes HD so seriously that PTC even named PTC518 after her birth date. A true Taurus, she’s forged on for more than seven years, excited for this next phase.

“It has been an honor to work on this disease,” Anu says. Brian enthusiastically concurs.

For more information about the Huntington disease project at PTC, please contact our team.