B.J. Viau is a lifelong Huntington’s disease (HD) advocate and has served as Board Chairman of the Huntington’s Disease Youth Organization (HDYO). The following article was contributed to the PTC Newsroom to help spread awareness about HD. Follow him on Twitter @BJsView.

I grew up watching my mother, Debbie, progressively decline due to Huntington’s disease (HD). Since the age of ten, I’ve worked to raise awareness and funds, and to provide support to those impacted by HD. 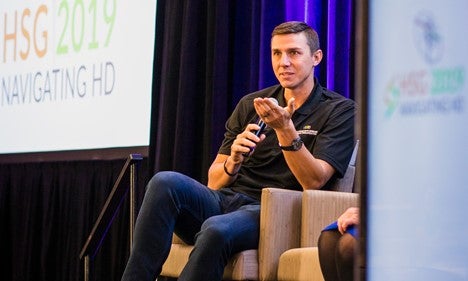 My family, friends and I spent 15 years hosting basketball events called Hoopathons, which were carnival-like fundraisers in a basketball gym. So many passionate people put in immeasurable amounts of time and energy to bring these to life. From trying to get one additional participant to one extra dollar, my life was consumed with planning and hosting; and then analyzing each event to start planning for the next one.

Although these events were to support the HD community, nobody got more out of them than me. Hoopathons became my outlet, and my way of coping and dealing with what HD was doing directly to my mom and indirectly to the rest of my family. I got to talk about HD to others as a kid, teenager and young adult.

I was watching my mom slowly die at a young age and was grappling with my own future knowing the high probability it could be just like my mom’s.

I chose to get tested for HD in 2010 as I desperately needed to know what my future would entail. You can find this out through a simple blood or saliva test and genetic counseling. Four weeks after providing my DNA sample, I received the news that I would not develop HD symptoms. Once I started to digest what this meant, I knew it was time for something else beyond the hoopathons. That was 10 years ago.

The phrase “survivors’ guilt” is commonly used in the HD community to refer to those who test negative and won’t develop HD symptoms, even though this rare disease runs in the family.  Why should someone else get symptoms and I am free of them, I asked myself over and over again. What I needed was a new project; and though I wasn’t actively seeking a new project at that time, a new HD project was seeking me.

I met a cohort of other young people from HD families at a conference in Vancouver in late 2009. Young people typically didn’t attend HD conferences, so it was refreshing to connect with others my own age, and legitimately mind-blowing for me to learn they were from HD families around the globe. I remember many moments of this meeting quite vividly: hanging outside of the conference with those folks, brainstorming how we were going to raise more money and spread more awareness about HD. It was this new fresh energy that I needed! 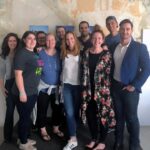 The energy continued months after the conference and led to the creation of the Huntington’s Disease Youth Organization (HDYO), an international non-profit supporting, educating and empowering young people living in families impacted by HD. I spent ten years volunteering with the HDYO team as the Board Chairman to build out the organization and create programs to support as many people as possible around the globe.

Last summer (2020), I stepped away from my formal involvement with HDYO. I am now focused on new opportunities to bring positive change to HD families.