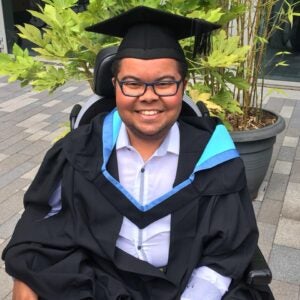 Benjamin James has a first-class honors Neuroscience degree; he is also a patient advocate and a healthcare communications consultant.

When he was four years old, Benjamin was diagnosed with Duchenne, which was managed in his younger years with steroid treatment, exercise and a good physiotherapy routine. As he reached his teenage years, Benjamin began attending Duchenne conferences where he heard from researchers and industry professionals about drug development programs for his condition.

It filled me with hope. I thought that this is a really cool area for science that could benefit everyone, including myself and others with Duchenne.

This inspired Benjamin to leave home in order to study Neuroscience at university. While at university, with the help of his powered wheelchair, Benjamin was able to live independently and experience university life to the full – from attending lectures to nights out. Benjamin graduated university with a first-class honors degree in Neuroscience, which he describes as one of his proudest achievements. But Benjamin was not finished with academia. He decided to challenge himself further and study for a master’s degree in Science Communication. Determined to not let his Duchenne stop him, he navigated his need for 24-hour care so he could continue to learn. 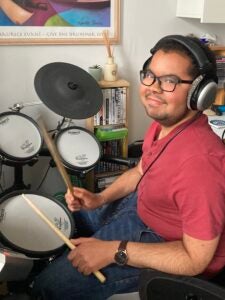 Alongside managing university life, Benjamin was keen to help support other young people living with Duchenne live life to the full, and so his passion for patient advocacy began. Benjamin has worked in connection with three leading groups in the UK: Action Duchenne, Duchenne UK, and Pathfinders Neuromuscular Alliance.

Benjamin credits Pathfinders for the strong relationships he has forged within the Duchenne community, including the Co-founder Jon Rey-Hastie and Mark Chapman. Benjamin has even described Jon as a great inspiration, as he has changed the narrative by showing it is possible to be living with Duchenne at an older age, and still be achieving amazing things.

Benjamin has a passion for all things music, and he has previously been in several bands, playing both the drums and piano, he also recently completed a DJ course! He has even taken part in the first fully inclusive mass participation sponsored walk with Parallel London.

Benjamin’s key message to the Duchenne community, is to focus on positive experiences:

You do not have to always focus on the negative side of things. You might need support doing things, but it is possible to live a life that you want.