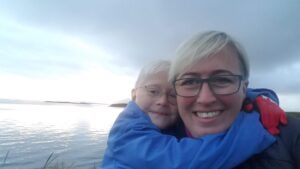 Hulda Svansdóttir is a mother of three, caregiver and Duchenne advocate from Iceland. Hulda’s life was transformed when her youngest son, Ægir, was diagnosed with Duchenne when he was four and a half years old. However, despite knowing little about the disease, when Hulda found out her son may be eligible for treatment, she was filled with purpose and knew immediately her role in life was to raise awareness of Duchenne. From that day Hulda decided not to let grief, sadness or fear about her son’s diagnosis define her or her families lives and instead set out to create a community that would spread messages of joy and hope, in Hulda’s own words “we need more positivity and compassion in the world”.

Due to the size of Iceland (a population of just over 360,000), Hulda found that there were not many others from the Duchenne community in Iceland to connect with and share important information and experiences. However, she found that there was great support from groups outside of Iceland. To start these connections, Hulda sought to build her own online presence and fill the gap. As a creative thinker, Hulda had so many ideas, but started by creating ‘Hope with Hulda.’ A charity built on supporting causes related to Duchenne and rare diseases. She also started social media account which is all about spreading hope, joy, and love through poetry. As an avid poet, Hulda found a way through writing poetry to deal with her own feelings of grief and address emotions from her son’s diagnosis. She is working on selling her poems online through her website hopewithhulda.com and is using the profits to support Duchenne research and rare disease families in Iceland.

Hulda’s positive nature, big personality and ‘just have fun attitude’ was combined with her and her sons love to just get up and dance in their living room. One day Hulda decided to record this and share it via her social channels. It went from a one-off to a regular occurrence called ‘Friday fun – Dancing for Duchenne’ and the response was unimaginably positive, so she decided this would be a good way to spread positivity and raise awareness in a fun way and thus “Dancing for Duchenne” was born!

Hulda and Ægir gradually started sharing videos every Friday and bringing in friends, family, and members of their community with the local fire department even requesting to take part! As Dancing for Duchenne grew on social media, more and more Icelandic celebrities took part and most notably Prime Minister Katrín Jakobsdótti got her groove on for Duchenne. As a result of this project, Hulda says, “there are probably not that many people in Iceland who don’t know about Duchenne by now” and after watching her videos many people have contacted her to ask about Duchenne and how they can help. The success of Dancing for Duchenne is a testament to Hulda’s infectious positivity even through hard times.

In Hulda’s words “Dancing is something that brings everyone together, you can’t not smile or laugh whilst you are dancing. It allows you to feel better even if only for a little while or if you are having a bad day”. 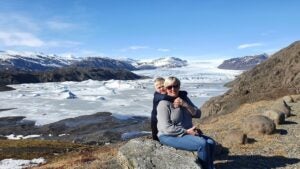 But Hulda didn’t stop there, she is always thinking of creative ideas and in addition to her Friday fun Dancing for Duchenne’ posts, Hulda has been instrumental in creating better representation for children in the disabled community. Hulda worked to translate the book “Duchenne and me” into Icelandic and distributed it around local schools. This book has allowed her son Ægir and other children with Duchenne be better understood by their peers. With an abundance of more ideas on the go, Hulda is also working on a documentary meeting and dancing with rare disease families from across Iceland. In addition, she has created a video showcasing the ‘doll like me’ project, which aims to produce dolls and toys representing children with disabilities, and she is even hoping to collaborate with Iceland’s biggest TV production company about this! Hulda also has dreams of creating a book series around the project so that children can read books that showcase rare disease children.

Hulda’s advice to those in the Duchenne community stems from the ethos behind Dancing for Duchenne.

Do the things that bring you joy. Try to enjoy the little things that make you happy, be in the moment”, (whether that is dancing in your bedroom, reading, or writing poetry or just enjoying time with your family).

We can’t wait to catch up with Hulda again to learn more about her upcoming projects.
To connect with Hulda on social look for ‘Dancing for Duchenne – Aegis journey’ on Facebook.